It's been a few weeks since New York, London, Milan and Paris had filled with a lot of fashionistas flew into the cities for the biannual fashion weeks. In spite of the events which were representing the upcoming fall season, I'm sure many of us are still dying to have the warm spring back. Which is why I think it's great time to go over 2012 Spring/Summer fashion weeks from New York, London, Milan to Paris to see what's in and what's out, also to forecast what to keep, store or throw away, or to have in mind what to buy for your spring shopping. These are 5 key trends that are the most outstanding through the fashion weeks that I personally picked for 2012 Spring/Summer season: 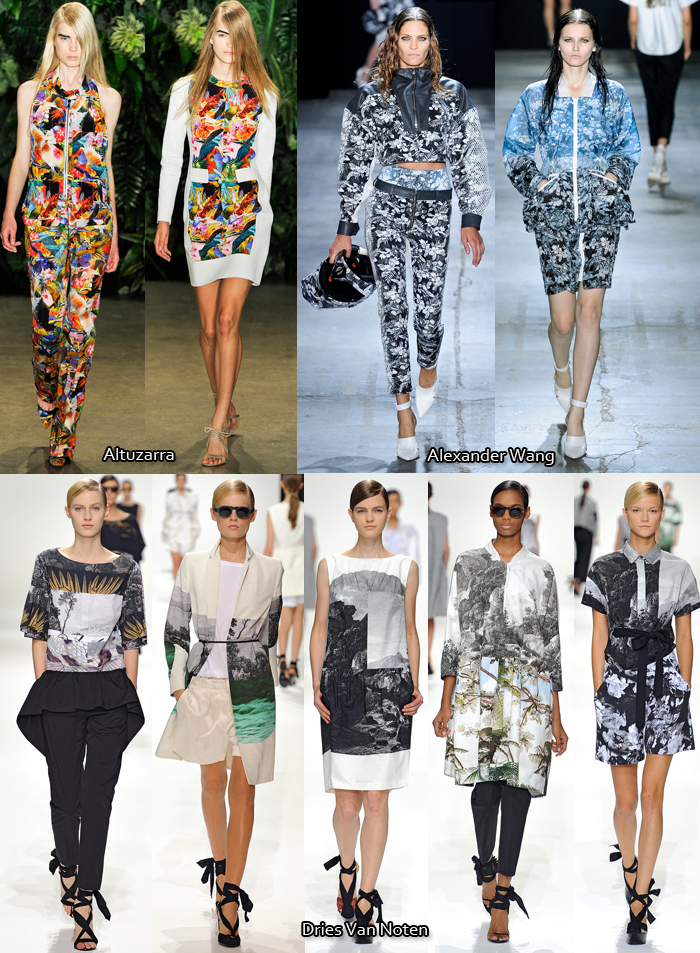 There were many designers from Altuzarra, Alexander Wang, Dries Van Noten, Mary Katrantzou, Rodarte, Balenciaga to Prabal Gurung to name a few that presented their collections with own prints; some are made with digital technology and others with existing arts. Whichever how they created their prints, the common thing among them is that they suggested new creative ideas of mixing and matching prints in very artistic way. Altuzarra showed beautiful tops, pants and dresses covered with floral prints, Alexander Wang's collection was filled with sporty and sexy racing-motif tees and trousers. Dries Van Noten'd brought oriental landscape paintings inspired by nature into clothes that seemed to be drawn with ink. 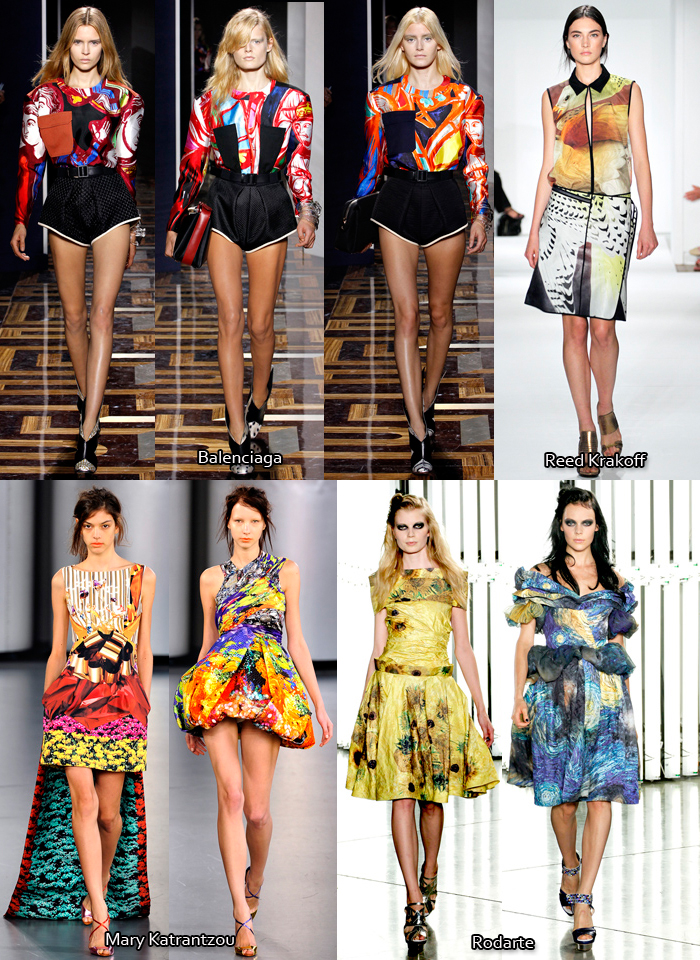 Balenciaga's collection was reinterpreted the traditional archives to the post-modern prints that seemed like stroke-drawn, the leading designer of women's purse Reed Krakoff's abstract prints were well-refined and sophisticated with simple silhouette, Mary Katrantzou's collection was full of flower-garden-inspired prints which securing her position as Queen of prints in London. Rodarte's collection was as if visiting Vincent van Gogh Museum as it'd seen with the popular paintings of him such as Sunflowers or The Starry Night. 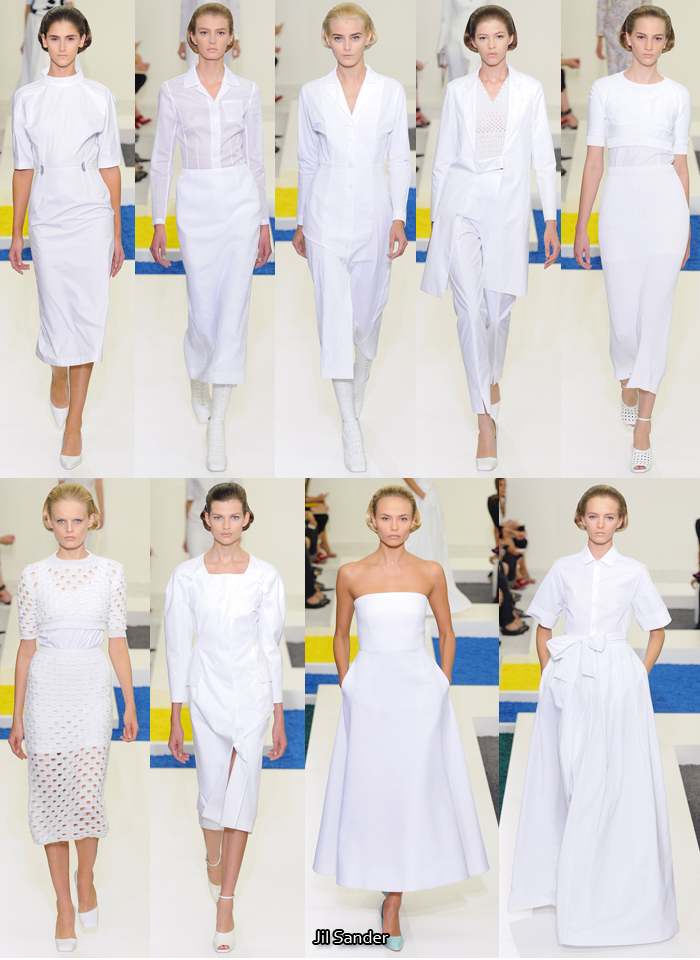 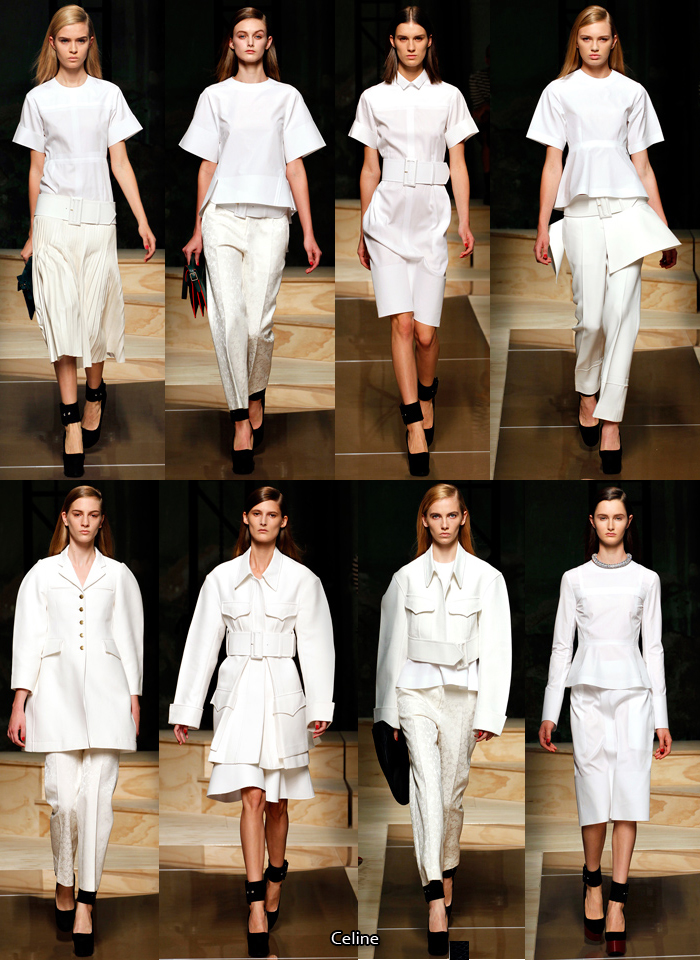 It wasn't that hard to find all-in-white looks from other designer brands such as Chanel, Hermes, Haider Ackermann, Alexander Wang, Stella McCartney, Dries Van Noten, Victoria Beckham to Altuzarra. It is definitely one of the strongest trends in this spring, although it could be pretty hard to pull off in real way as they are many elements that will make it dirty.

This spring, a lot of fashion designers seem to convey positive energy as the global economy's been not doing so well. The cool, sporty and positive vibes were shown from Alexander Wang, Balenciaga and Victoria Beckham. 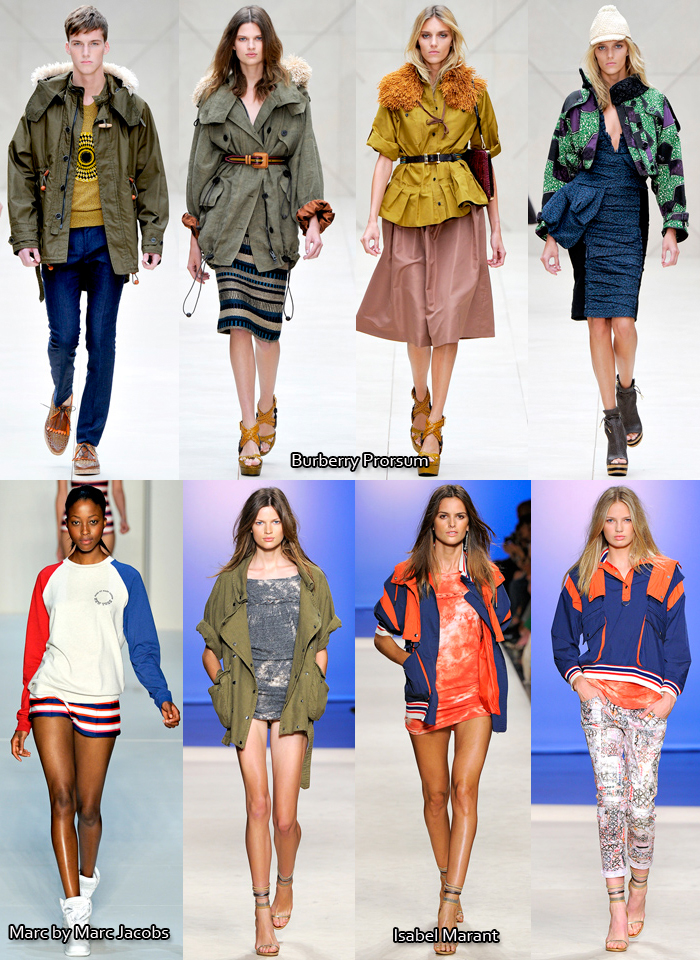 One of the dearest fashion shows London Fashion Week, Burberry Prorsum also reformed classic Burberry jackets into playful and sporty anoraks. Marc by Marc Jacobs's look was as if he designed a uniform for American national team, and the representative of , Isabel Marant showed cool and hip Parisian chic with active anorak jackets. 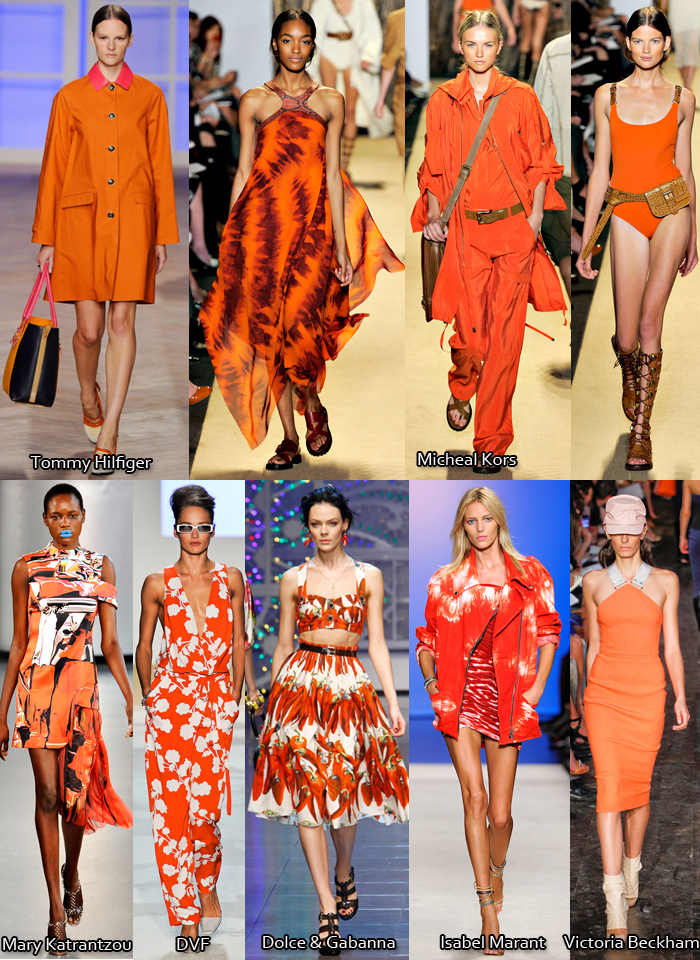 In 2012 S/S season, you probably will have to keep various shades of pinks in your wardrobe, because the hottest color for this spring is not pink as usual unfortunately. As you can see above and below, there weren't many designers showing pink in their collections, but sun-bursting orange colors were painted in many runways. Mary Katrantzou, Diane von Furstenberg,  Dolce & Gabanna used oranges mixed with patterns and prints, whereas Micheal Kors and Isabel Marant tie-dyed orange-colored fabrics.

Victoria Beckham and Marc by Marc Jacobs's collections were full of playful and casual pieces in orange, whereas Hermes, Donna Karan and Doo.Ri's were showing more sophisticated and feminine shades in orange. 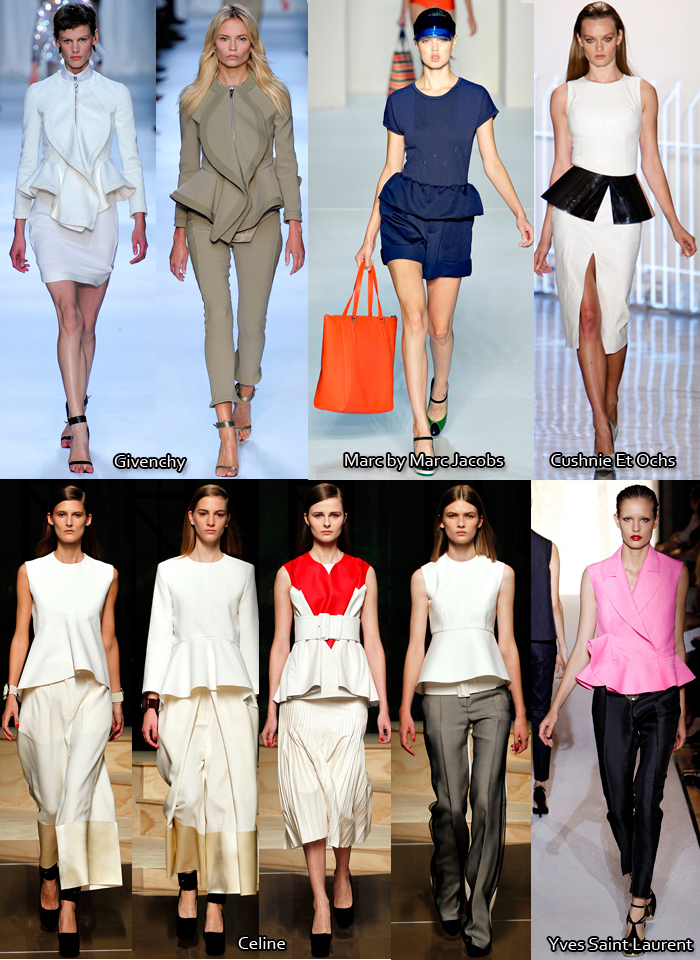 Peplum's been a strong fashion statement since last F/W season, but it doesn't seem to be washed away this S/S season either. Givenchy showed mannish suits with cigarette pants that mainly focused on the feminine peplum on the center. Marc Jacobs didn't miss the mega trend as showing peplum-pointed skirt-suit. The fashion designer who's known for knowing women's body very well, Phoebe Philo of Celine showed various tops and jackets with peplum effect. Also, Stephano Pilati's Yves Saint Laurent and Jason Wu showed peplum tops or dresses in pretty pink.


It took me nearly 2 weeks analyzing, collecting the material and writing this trend report. In the meantime, all of the F/W Fashion Week from New York, London, Milan and Paris had finished. I must admit, there can be quite a bit of grammatical mistakes and errors, but I hope you enjoy this article and find it helpful. Thanks so much for visiting BEYUNIQUE!